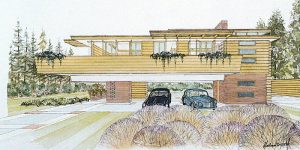 Excerpt from “Organic Modernism: The Architecture of F.T. Hollingsworth” by Rhodri Windsor Liscombe, Journal of the Society for the Study of Architecture in Canada (SSAC): Jun. 1996 (21:2), p. 44-49:

“The collaboration between Hollingsworth and Allan inspired a fascinating experimental house, erected in 1949 on the downtown parking lot of the Hudson’s Bay Company department store (figure 4). Christened the ‘Sky Bungalow’, it offers an intriguing comparison with Marcel Breuer’s costlier Museum of Modern Art model house (1949), and with Wright’s wood-frame houses, such as that for the Lewis family in Libertyville, Illinois (1940), inspected by Hollingsworth in 1951. Hollingsworth’s consciously essential solution to the essential problem of shelter, measuring only some 55 x 18 feet, was built of local brick and wood (on steel supporting beams to conserve the maximum number of parking bays). In structure, spatial organization, and articulation, the Sky Bungalow demonstrated the principles, or principal constituents, of his architectural design and the ethos of what might be termed the Heroic, functionalist phase of postwar Modernism in Canada.1 Indeed, Hollingsworth realized the ‘truly indigenous’ American domestic architecture Kenneth Reid hoped for in 1944:

In plan they would take full advantage of the opportunity for openness afforded by modern heating, glazing, and structural methods. The interiors would be clean and simple and restful. In them, scientific knowledge of light and color would be applied with intelligent artistry to produce a comfortable background for family life and social activity…. A greater proportion of built-in furniture than in the past would help to increase this sense of order. Outdoor space would be integrated with the life of the family through useable and useful gardens, terraces, and patios, designed for gracious use, not for show.2

“The living room in the Sky Bungalow was compact, yet rendered spacious by a series of carefully conceived and interrelated design strategies (figure 5). These began with the effective organization of plan and circulation, and continued with the inclusion of long vistas and the interplay of planes to reinforce the space-enhancing penetration of light sources on the vertical and horizontal axes. Those sources were carefully balanced to prevent excess single-direction illumination, usually by the diffusing effect of clerestories. That enfilading of structural opacity was controlled by the focal effect of the brick fireplace, which introduced the visual, and thereby psychological, sensation of functioning behavioral space. Moreover, it contributed to space-saving and ambience with its built-in shelving (with, as elsewhere, oriental artwork). The moulded plywood furniture—Hollingsworth has and continues to design more graceful and usable furniture than Wright—the books, the prints, and the flowers recall how that generation concurred with Wells Coates: the standardizing functionalism of Modernism would be mitigated by the introduction of objects of personal worth.3 The potential for individuality and variety was further expressed in the dining area, on the other side of the fireplace wall (figure 6 and cover). There, space-vista more than space-wall was apparent in Hollingsworth’s optical and psychological exploitation of the pattern and texture of common materials. His ability to manipulate formal volumes so as to render them appropriate for specific activities, as well as evocative both literally and representationally, is alike evinced by turning to the galley kitchen. Herein, even the stainless steel splash guard, refrigerator, and utensils were arranged to perform efficiently, yet also act as aesthetically stimulating visual elements in the internal landscape.”

1 Hollingsworth’s success with the Modernist idiom—completing at least 84 houses though his career—calls into question Robin Ward’s opinion that the movement gained limited popular appeal in Vancouver, as quoted in Gordon Fulton’s review of Kalman’s A History of Canadian Architecture, in SSAC Bulletin 20, no. 1 (March 1995):23.

3 From the typescript of an article entitled ‘Design in Modern Life’, dating from about 1937, in the Coates archive, box 0, file 6, Canadian Centre for Architecture, Montreal. Coates predicted that it would soon be ‘held as unreasonable’ to pay to move heavy furniture as to move central heating systems from house to house, ‘leaving for the personal [illegible] such portables as textiles, books, clothing, pictures and crockery.’