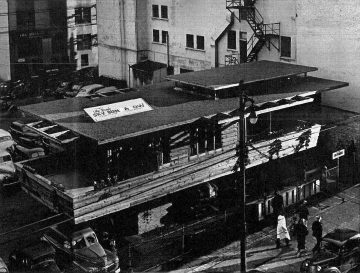 Fred Hollingsworth (1917-2015) designed the Sky Bungalow in 1949 as a show house to promote the Capilano Highlands development. It was constructed in the parking lot of the Hudson’s Bay department store in downtown Vancouver, where it was allowed to take up only three parking spaces, so the solution was to elevate the house off the ground on a brick utility room and brick piers. It was considered startlingly contemporary and introduced many people to what would become common features of West Coast modern homes.

Following the exhibition, the house was sold and moved to its current location in North Vancouver in the early 1950s. A new infill ground floor, also designed by Hollingsworth, was constructed; along with other additions, this greatly enlarged the house. Despite subsequent alterations, many original features remain. 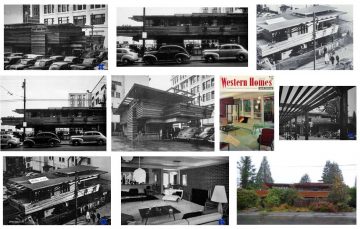 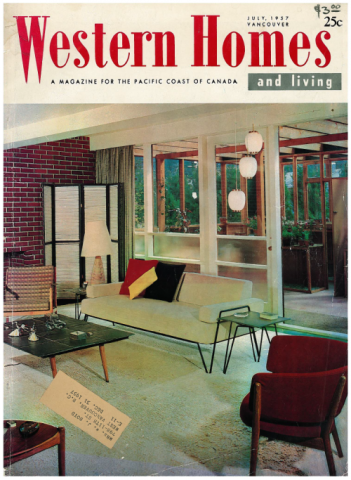 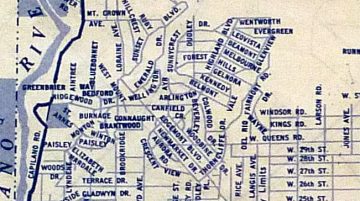 From city directories in the Vancouver Public Library:

The Sims lived in the house until they sold it in November 2010 to the current owners.

An old map at the District of North Vancouver offices seems to show the street as the entry to a potential subdivision, with 3355 taking up 3-5 current lots. The original building permit was in June 1950, with another building permit for a lower floor addition in September 1951. In December 1957 the owners were required to remove some other structure that was nonconforming, and in the 1960s the DNV sent letters to two families living there, indicating the single family zoning.

So the structure was originally placed on site in 1950 with no additions, on a big lot at the entrance of the development – then a downstairs addition arrived a year later. But on-site investigations have raised further questions about the phasing of the additions.

1 Other contemporary references state that Mr & Mrs Len A Nikoloric owned the property in or around 1957. Bavanište is near Belgrade in Serbia and Nikolorić is a Croatian name, so perhaps they were connected.